Remembering September 11…. And the Day After 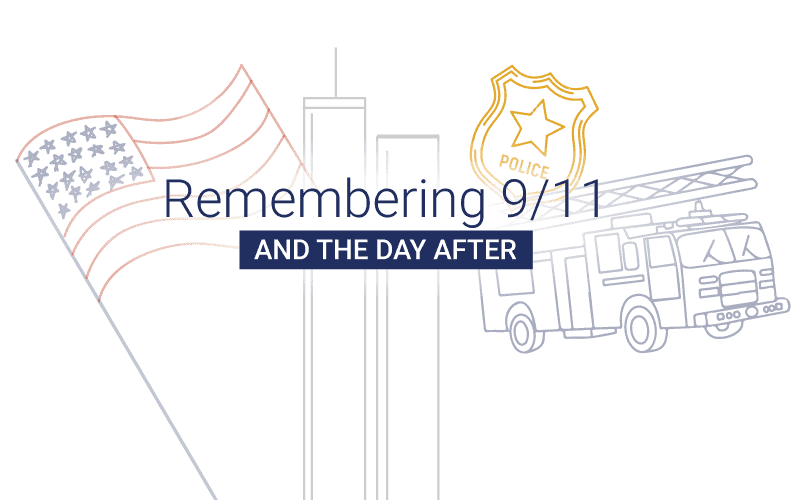 This month, we observe the 20th anniversary of the September 11 attacks. But there’s another day I feel we should be observing, too: September 12, 2001.

It’s been a long road for our country since then. So much has happened, so much has changed. One of those changes is the role September 11 plays in our lives and the place it holds in our hearts.

You see, when those 19 terrorists seized the planes, they were trying to drive a wedge through the heart of America. They wanted every American to feel terror and hatred. And it worked –but only for a short time. Because even though the towers fell, something happened after September 11 that they couldn’t anticipate. Something far too powerful for them to ever destroy.

That thing was September 12.

On September 12, firefighters rescued two survivors who were buried beneath the rubble, even after all hope of finding survivors was lost.

On September 12, workers began the monumental task of cleaning and then rebuilding Ground Zero.

On September 12, candlelight vigils were held in Union Square, Central Park, and locations around the country.

On September 12, other nations played “The Star-Spangled Banner” in honor of the United States.

On September 12, parents everywhere hugged their children close and whispered, “I love you.”

On September 12, spouses held hands and gave thanks for what they had.

On September 12, the country began to heal.

We spend more time being grateful for our country.

All of us, I think, have at some point wondered, “Why?” Why did September 11 happen? Why did such a tragedy occur? Why is there evil in the world? But at some point, those questions recede into the background. Anger and bewilderment over the past fade, replaced by hope for the future.

As Brian Clark, a survivor of the World Trade Center, once said:

“Why am I here? What is the reason I was saved? They’re really unanswerable questions. After going through something like I did, all you can do is try to live your best life from day to day and move forward with gratitude.”

No terrorist in the world could stop America from healing- or her people from moving forward with gratitude. Twenty years later, that is the legacy of September 11. And it’s why I will always remember September 12. On behalf of the entire team here at Concentus, I wish you a safe and peaceful September 11 and a hope-filled September 12.

May we never forget.