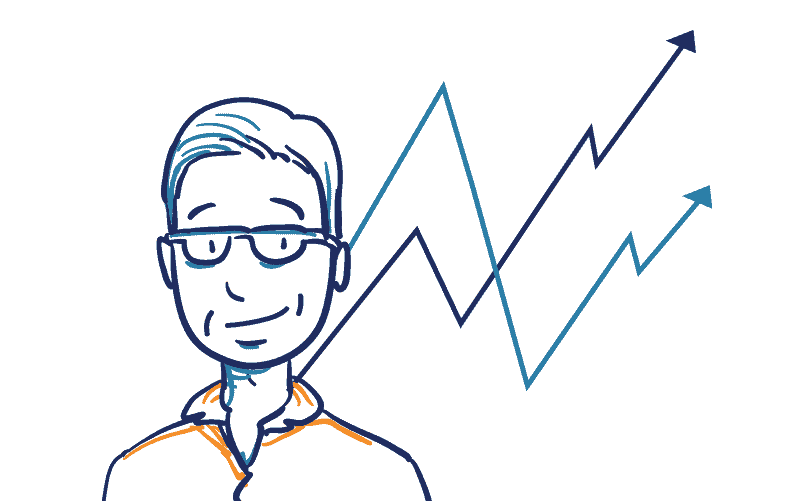 In last month’s article, we reviewed one of the most awful years in American history. This month, we explore how our own human nature causes us to make so many unforced errors.

As I sit down to write this month’s commentary, the S&P 500 is reaching another all-time high, a level of just about 4,100. Given how many new all-time highs I have seen the equity market reach over my 30-year career, I am constantly amazed at how many people still say things like, “I lost money in the stock market.” or, “Stocks are too risky for me.”

How does someone lose money in an asset class that’s been compounding at 10 percent per year for nearly a hundred years, while its dividend has been growing at roughly twice the consumer inflation rate? How does one conclude that such an asset class is “too risky?” The answer must be that he or she made one or more of the classic investment mistakes or erroneously drew a conclusion about the future that was perfectly contradicted by all the evidence.

Here are two facts that may seem impossible to be simultaneously true, but they are:

What do you call someone who can comprehend this set of facts and continue to function prosperously as an investor? Answer: you call her an equity investor worthy of the name.

What do you call someone who reads these two perfectly contradictory ideas and who elects to be guided by the latter – that is, by the litany of bear market disasters that have occurred over the last half-century? I’d simply call her fatally mistaken and doomed to investment failure.

Investment failure is not caused by the equity market, which historically has done nothing but enrich the disciplined, patient, long-term equity investor. Rather, investment failure is always and everywhere caused by one or more critical mistakes on the investor’s part – unforced errors that he need never have made and that his own human nature constantly tempts him to make.

Our Concentus team was sent into the world to intervene – for those valued clients who trust us to do so – in those moments when most investors are predisposed by their own human nature to make these regrettable unforced errors.

The American economy will always prevail in the long run, as the newly minted centi-billionaire, Mr. Buffett of Omaha, reminded us a few weeks ago in his annual shareholder letter. Taken as a class, the equities of rationally managed, profit-seeking companies that participate in the U.S. economy will continue to reward their owners over time. While quite wonderfully true, it’s also sadly true that most investors will fail to participate in this accretion of wealth due to a host of bad choices that are hardwired into their psyches.

Every day, an American investor succumbs to the impulse to fearfully flee falling markets or greedily chase speculative fads. In just the last year, we have all seen scores of our countrymen abandon equities out of fear of the coronavirus crisis, or the election, only to watch the S&P 500 climb on to all-time high after all-time high. For those who did remain equity investors, many gave in to the temptation to “chase” the runaway performance of mega-cap technology stocks, just as small-cap and value companies began to perk up. Others put all their wealth in gold, bitcoin, or GameStop options.

These investors did not make these mistakes because they lack intelligence. They did so because they are human, and human nature is the enemy of successful investing and the source of all unforced errors.

A few weeks ago, on March 23rd, the S&P 500 celebrated the one-year anniversary of its coronavirus low. Over 35 days last spring, the U.S. equity market fell by 34 percent to a low of 2,237. Since that day, as of now, the S&P 500 has risen by over 80 percent to a level of 4,100. Of course, human nature tells us that “What goes up, must come down” and beckons us to attempt to predict the “top” of the stock market by liquidating our equities now.

However, if we use economic fundamentals as our guide, the picture for the U.S. economy is looking quite strong right now. Who would ever have imagined one year ago, at the depths of the pandemic’s economic malaise, that the following would be true?

Economic forecasters were tepid for months about prospects for the U.S. economy, but that’s recently changed. In fact, on March 14th, Goldman Sachs announced that they were raising their forecast for GDP growth in 2021 to an astonishing 8 percent rate and expected an unemployment rate of just 4 percent this year, on the way to 3.5 percent in 2022. For perspective, the unemployment rate was an astounding 14.7 percent last April. Further, the last time GDP growth hit 8 percent in the U.S. was way back in 1950, before I was born. It hasn’t even topped 6 percent once since 1984 when I was starting high school.

In addition, the lowest the unemployment rate reached BEFORE the pandemic was 3.5 percent, which many consider to be about as close to full employment as we can get in this country. And now, Goldman Sachs is saying we could get back there in 2022.

It appears that Goldman was on to something with this prediction for unemployment. On Good Friday, the Bureau of Labor Statistics released the March 2021 employment data, and payrolls increased a staggering 916,000 for the month, easily beating the consensus expected 660,000. Jobs increased most in leisure & hospitality (up 280,000), construction (up 110,000), and education and health services (up 101,000). Meanwhile, manufacturing jobs increased 53,000, while government jobs rose 136,000 (almost all in education services).

Of course, these numbers are mainly a result of the “snap back” in economic growth from a dismal year in 2020, thanks to the pandemic. But it is important to remember the level of Armageddon that most economists were predicting just one year ago.

It’s human nature to immediately fix a problem when it’s not going our way, but an equity investor worthy of the name understands patience. And, if you need help staying the course, we’re here to guide you.
CONTACT US TODAY
By Erik Strid|2021-04-22T12:01:38-04:00April 12th, 2021|Blog, Great Investors Series|