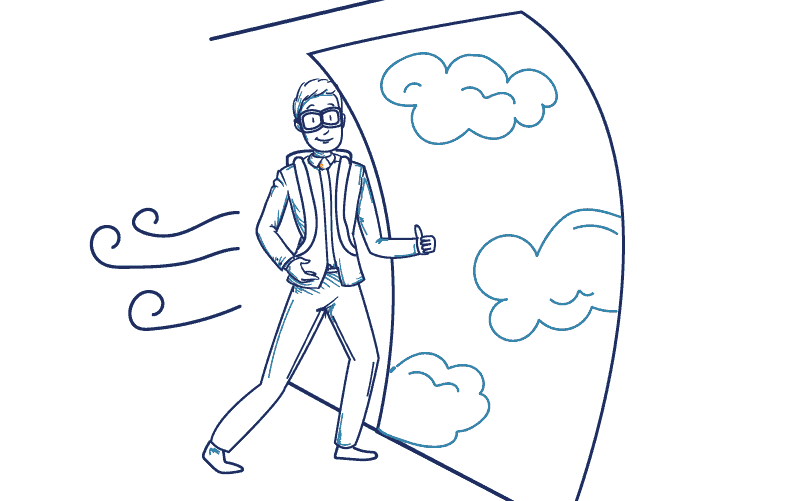 “Fear is the foe of the faddist, but the friend of the fundamentalist.”

In last month’s article, we unpacked the fallacy of the markets being “due” to crash. This time, we discuss how wrong the pessimists have been over the last nine years.

Fear and the Coronavirus Crash

It’s impossible right now to turn on a television or go online and not be greeted by fearful news of the spread of the coronavirus. First and foremost, it’s important to think of those affected physically by its spread; even the loss of a single life to a virus like this is a tragedy. The virus has other important implications, though, ones we’re much more qualified to address.

By any standard, an equity market decline of 19% in just fifteen trading days is a breathtaking drop, which has inspired a great deal of investor fear and emotion. In fact, we were astonished to watch on Monday, March 9th as the VIX, the so-called “fear index, spiked to an intra-day high of 54.5.

We were curious if this measure of investor fear had ever been this high any time in the last ten years, since the end of the Great Panic of 2008. After a little research, we found out that the VIX had been this high on one day only, in all that time. The date was Monday, August 24, 2015, and the VIX hit 53.29.

That day was “Black Monday.” In China, the market fell 8%. In India, the Sensex recorded its biggest one-day drop ever, ending the day down nearly six percent. The FTSE in London was off by more than 4%. Oil hit a six-year low. And the Dow Jones started the day by going down 1,000 points.

It was a historic day of global financial and economic panic. As, indeed, was last Friday. Think of it, dear reader: There’s only been one day in the last ten years when panic as pronounced as it was on Monday. And on that day, less than five years ago, the S&P 500 closed at 1,893.21, 1,000 points lower than last week.

As Warren Buffett, the Sage of Omaha, has so charmingly said, “Fear is the foe of the faddist, but the friend of the fundamentalist.”

The Pathology of Fear

With fear at such high levels, it may be useful to examine the pathology of panic, and to understand what people are thinking when they arrive at the decision to sell a portfolio of quality companies in a fearful moment.

It doesn’t seem possible that anyone has concluded that iconic businesses like Disney, Apple, Berkshire Hathaway, Wal- Mart, or J.P. Morgan Chase have lost 19% of their enduring value in the space of fifteen trading days. If they were, they wouldn’t be panicking. Most often, they have instead fixed their attention on some national or even global crisis, which may be real or possibly imagined. Reality is never essential to full-blown market panic. Genuine panic almost always requires that two conditions must be met:

There is a resulting third condition for panic of this magnitude. It must enable the great mass of investors to say: “This time it’s different.”

The nastiest episodes of fear, the ones that cause investors to really lose their minds, are usually driven by national or global events or trends, which nobody understands and have nothing to do with the actual functioning of the economy itself.

We don’t really hear anyone going around suggesting that superior companies are somehow going to come unglued on their own. Instead, we are told that the galloping deficits and mounting debt of the United States will touch off hyperinflation, which will cause the dollar to lose its status as the world’s reserve currency and turn into toilet paper. Or that Donald Trump will be re-elected. Or that Bernie Sanders will be elected. Or that the next Hurricane Katrina or Hurricane Sandy will devastate a massive area of the U.S., plunging the economy into a deep and long-lasting recession. Or that the newest version of SARS/ebola/bird flu/swine flu/COVID-19 will grind all economic activity to a permanent halt.

What do all of these phenomena have in common? They have nothing at all to do with the infinitely resilient workings of the private economy. Instead, they are what we call exogenous variables.

The scary Armageddon theories of the economy rarely emanate from inside the private sector itself. Rather, the disaster scenarios that feed the insatiable hunger of pessimists are most often conjured out of fears about governments, natural disasters, viruses, geopolitical violence, and the like. They are exogenous, externally caused rather than resulting from conditions within the organism itself.

To be a pessimist, one must conclude that one or more of these exogenous variables are capable of killing the organism. All of history demonstrates quite conclusively that they are not. And no, this time is not different.

Taking Chips Off the Table

The coronavirus is just such a variable, and it has obviously caused many analysts and investors to believe that the U.S. equity market is in for more pain. Indeed, many smart and highly respected investors and market pundits have made the case for impending doom in the markets, as the economy slows in response to virus fears. These predictions have already caused many investors to capitulate to their fear and liquidate their equity portfolios, as evidenced by the VIX numbers.

With this fearful environment as a backdrop, it is no surprise that many of our valued clients are looking for some guidance on what we should do in response to this gloomy outlook. Typically, the implied question is, “Given the big run up we have experienced in the market, and this scary prediction, should we ‘take some chips off the table,’ and reduce our exposure to the stock market? Should we raise some ‘dry powder’ we can use to take advantage of the next big market downswing?”

After a nine-year bull market, stocks are up so much, why not take some chips off of the table? It certainly sounds smart and logical. After such a big run up, what is there to lose?

It is interesting to note that many investors have adopted the terminology of gambling, and we talk about “taking our chips off the table” as an analogy for liquidating equities. If you go to a casino, you should know in advance that the odds are stacked against you. In the long run, the house wins, and you lose. While you may go on a “winning streak” and beat the house for a short period of time, if you stay at the table long enough and keep gambling, eventually you will lose. If you are lucky enough to experience such a winning streak, it is probably a good idea to “take your chips off the table” before the inevitable happens and you start losing.

The stock market doesn’t work that way. If you invest in the stock market, the odds are stacked in your favor. The fact is that, historically speaking, the stock market has had an upward bias over time and always goes up eventually. While stocks might experience temporary periods when they decline, and sometimes sharply, they have always recovered and moved on to new highs. Stocks have gone up more often than they have gone down – historically the positive trading days outnumber the negative trading days, and roughly three of every four trading days have been positive. So, the odds of any given day, month, or year experiencing a positive result in stocks is much greater than the odds of a negative result.

More importantly, the up movements in stocks have also been significantly larger than the temporary setbacks they have suffered. Despite the fact that severe corrections and bear markets have occurred in stock prices over the years, in every instance, those setbacks have been only temporary, and stocks have eventually climbed back to even, and then on to new highs. The net effect of these movements has been an average compound rate of return of just about 10% per year over the last 100 years.

If we accept these facts of history, we must logically conclude that we are wise to own stocks over the long run, because stocks have produced a long-term return of roughly 10%, which is superior to almost every other asset class. So the question really becomes, “Are we sometimes wise to ‘raise dry powder,’ and to temporarily sell our stocks, to raise our cash levels in anticipation of a crash, which we can then take advantage of by buying our stocks back at a lower level?”

In order for this to be a prudent strategy, an investor must be prepared in advance to understand two important actions he or she must take:

It is this second decision where things get really tricky.

If an investor raises cash in a portfolio, he or she might be “right,” and the stock market may in fact decline right after he or she sells his or her stocks, offering the opportunity to buy back in at lower levels. If stocks are down 5%, 10%, or 20%, will he or she have the confidence to step up and buy back in, or will they be afraid that things are about to get much worse, and that it is best wait and see? Of course, when things stabilize, it will most likely be too late, and markets will have recovered.

However, the investor who raises “dry powder” must also be prepared for the much more likely situation, which is that the stock market will continue moving up after he or she raises cash. This is where things get really tricky. “At what point will I conclude that my strategy of getting out was wrong, and capitulate to the permanent uptrend by buying my portfolio back, at higher prices?”

It might very well be wise to “raise dry powder” when the market seems destined for a correction. However, if we are picking a time to get out of stocks, we had better have a good idea of when we plan to get back in … which may be much tougher emotionally than we expected.