Failing to Plan is Planning to Fail 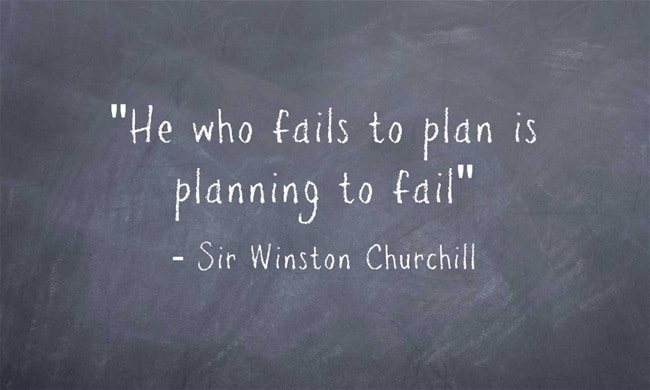 When it comes to wealth planning and investing, most people suffer from the illusion of complexity, and believe that the achievement of significant financial success will require us to grapple with a great deal of complexity.

Popular culture and the financial media would have us believe that markets are a complex problem to be solved, and that the quest to master those complexities as a means of achieving superior returns is our only hope for long term financial success in life. I have found that many people struggle with anxiety about their wealth planning, and are intimidated by the topic of investing, because they have bought in to this illusion of complexity.

Leonardo da Vinci was one of the most sophisticated humans of his time, and perhaps of all time, and he observed the paradoxical truth that most of the sophisticated problems in life are remarkably simple. In a similar way, the achievement of long term financial success is simple as well, and requires nothing more than the execution of a few very simple tasks which we discuss below.

As you read about these simple tasks, you may notice that “selecting the best 5-Star funds” is not on this list. The investment management industry and the financial media are constantly bombarding you with the misconception that the only thing that matters to your long term financial success is the selection of the financial products you own, and your ability to uncover the “Holy Grail” of investment performance relative to some arbitrary benchmark.  These messages perpetuate the illusion of complexity.  Instead of the constant worry about whether you picked the right 5 star fund to buy, or how the “relative performance” of your investments stacked up this year, the simple truth is that that while the selection of investments may make up 5% of your long term investment success, your behavior and the actions you take will make up 95%.

Failing to Plan is Planning to Fail

First and foremost, long term financial success demands that you work from a written wealth plan. It has been said that failing to plan is planning to fail, and this saying certainly holds true when it comes to your wealth.  People who sit down and design a date-specific and dollar-specific written wealth plan have a much greater chance of building and preserving wealth than those who don’t. The simple truth is that all long term investment success comes from acting on a plan, while all failure is precipitated by reacting to the markets.  For some reason many people can’t accept this, and discount the value of planning –very few people actually have a specific, written financial plan but instead are fixated on “outperforming the market”.

“Outperformance” is not a financial goal, and it is certainly not a financial plan. If I “outperform” my neighbor by a full 3% per year in the 20 years to retirement – a whopping margin, by anyone’s reckoning – such that he runs out of money when he is 79, and I don’t run out of money until I am 84, it won’t matter much when we are both sitting on a park bench at 86, without two nickels to rub together between us.  Those who believe in the primacy of “outperforming the market” don’t figure this out until it is too late to sit down and write a financial plan with the proper calculations for how much they needed to save for retirement, or how much they should spend in retirement.

Stick With the Plan!

The second critical task, once your plan is in place, you must develop a specific policy for investing your capital in the classes of investments which have historically provided the returns which will be sufficient to achieve the goals of your plan. Which brings me to the final, and most important step in the process:

The most important step is that you must stick with your plan, when you are tempted not to; because of the fads, fears and emotional volatility of the investment markets which can throw you off course.

This last step is indeed very simple: in order to build and preserve your wealth over time, one must remain consistently disciplined to continue acting on their plan, and not reacting to the markets. While this is simple, it is not easy.  Human beings are emotionally hard wired in a way that tempts us to abandon our plan in a panic when market corrections or bear markets arise, or in a fit of euphoria when a “new era” bull market entices us to throw caution to the wind and bet our entire retirement on dot.com stocks.

What is the possible cost of constantly reacting to markets, instead of patiently following an investment plan? Consider an example:

According to Kiplinger’s, the Parnassus Endeavor Fund was the best performing equity fund of the last 10 years from 12/31/2006 through 12/31/16.  Its annual performance track record for the last 10 years is as follows:

Let’s assume that I am a whiz at mutual fund research and due diligence, and I spent a ton of time back in 2006 to find the best fund in the land. Thanks to my sharp skills at mutual fund research, I was somehow able to spot the potential of the Parnassus fund, and decided to invest my retirement all in the Parnassus fund in the beginning of 2007.

My neighbor spent all of that time carefully designing his financial plan, and educating himself about market history and volatility, so he would be prepared for a bear market, and wouldn’t “over-react” when one came along. He decided to simply invest his money in an S&P 500 index fund, to keep things simple.

In 2008, when the world seemed to be coming to an end, I panicked and sold all of my holdings in the Parnassus fund, and put it all in a nice safe and solid bond fund yielding 3%. My friend hung in there and stayed with his plan, and kept on investing in the S&P 500.

Guess who got a better return.