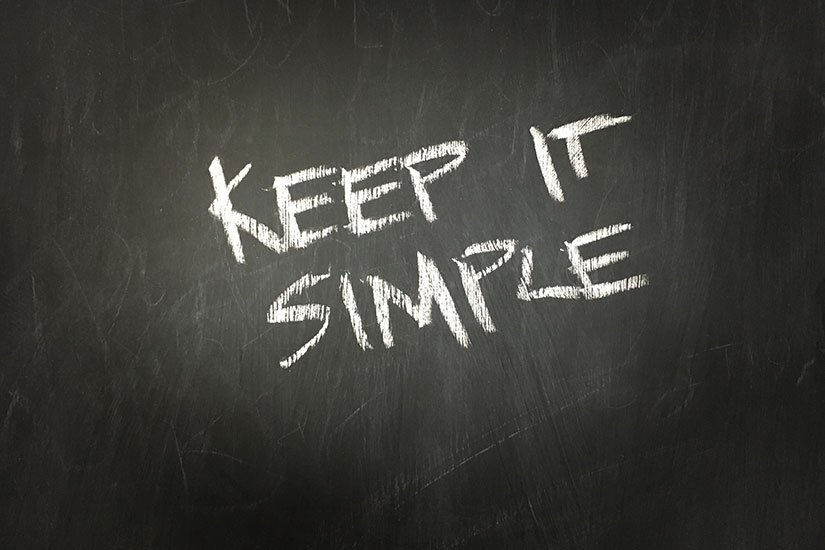 “Investments are like a bar of soap. The more you handle them, the smaller they get.”
– Warren Buffett

In last month’s article, we focused on “Understanding Value” as one of the great qualities to adopt for anyone who wants to become a great investor. This month we focus on a similar, but slightly different quality…Great Investors Keep it Simple.

October has come and gone, the Halloween costumes have been put back in the attic, and kids across America are walking around in a hazy fog as they come down from a sugar rush from eating bags and bags of candy. October was an interesting month for stock market observers, as it marked the anniversary of two important events for investors, as well as a big win for Warren Buffett.

The first significant anniversary was on October 19th, which was the 30 year anniversary of “Black Monday”, and the stock market crash of 1987. Although this event doesn’t weigh very heavily on most investors’ psyches today, that day was a real doozy, as the Dow Jones Industrial Average lost 22.6% of its value in a single trading day. For comparison, on the very worst single day of 2008, the market declined by 9.03%, not even half of the damage done on Black Monday. If an event like this were to happen today:

It is also worth noting that the S&P 500 closed at 224.84 back on Black Monday, and today stands at over 2,550, an increase of well over 10 times in 30 years (excluding dividends). The dividend rate of the S&P 500 is currently more than 5 times higher than it was that day. More evidence that stock price declines are temporary, while the increases in values and dividends are permanent.

The second significant anniversary was on October 9, 2007. The day marked the all-time closing high for the S&P 500, before the market crash of 2008. Of course, what happened next does still weigh heavily on most investors’ psyches. Over the following year and a half, stock prices experienced the largest decline since the Great Depression, and at one point traded 57% lower than that high point.

While this anniversary is interesting, there is an eerie symmetry to this next fact. An investor who placed $1 in the S&P 500 at the very peak of the market on 10/9/07, and who held their stocks for a full 10 years, reinvesting dividends, had exactly $2 in their portfolio by October 2017 . In ten years, the S&P provided a return of double your money, despite the terrible bear market which occurred in the beginning of that period. The S&P 500 delivered a compound total return of 7.2% per year over this 10 year period, which is admittedly somewhat less than the 10% long term average annual returns historically produced by stocks…but it is still better than a sharp stick in the eye.

And finally, Warren Buffett’s big win is the real topic of this article. Back in late 2007, sophisticated and complex “hedge fund” investments were all the rage on Wall Street, and large investors had an almost insatiable appetite to invest in these mysterious and complicated investment strategies. At the peak of hedge fund popularity, Mr. Buffett announced that he would bet $1 million (to be donated to charity) that the S&P 500 Index would outperform a portfolio of any five hedge funds, after fees and expenses, over the following 10 years.

This bet seemed foolish to many “sophisticated” players on Wall Street, who had supreme confidence that the only way to beat the market was to invest in these esoteric fund strategies. Eventually, in December of 2007 Buffett’s bet was taken up by Mr. Ted Seides, who is a co-manager of a successful fund of hedge funds.

Although the bet isn’t officially over until the end of this year on New Year’s Eve, Mr. Seides has conceded his loss already, because his funds are so far behind, he has no chance of catching up.

Warren Buffett has a solid understanding of the value of “keeping things simple”, and his bet exposed a dangerous problem in investing that we call “the curse of knowledge”. Investing is not necessarily about mastering complexity with our rational intelligence and intellectual sophistication. In fact, most great investors understand that rational intelligence can actually become an obstacle to successful investing and wealth planning.

The problem is, rational “knowledge” or reason cannot be used successfully in most human affairs, such as investment markets, because such affairs are governed by human emotion, which often defies logic and reason. Author Nassim Taleb captured the essence of this “curse of knowledge” wonderfully when he called it the “lecturing birds how to fly” effect. He wrote:

The greatest problem in knowledge is the “lecturing birds how to fly” effect.

Let us call it the error of rationalism… Consider two types of knowledge. The first type is not exactly “knowledge”; its ambiguous character prevents us from calling it exactly knowledge. It’s a way of doing things that we cannot really express in clear language, but that we do nevertheless, and do well.

The second type is more like what we call “knowledge”; it is what you acquire in school, can get grades for, can codify, what can be explainable, academizable, rationalizable, formalizable, theoretizable, codifiable, Sovietizable, bureaucratizable, Harvardifiable, provable, etc.

The error of rationalism is, simply, overestimating the role and necessity of the second type, the academic knowledge, in human affairs. It is a severe error because not only is much of our knowledge not explainable, academizable, rationalizable, formalizable, theoretizable, codifiable, Sovietizable, bureaucratizable, Harvardifiable, etc., but, further, such knowledge plays such a minor role in life that it is not even funny.

We are very likely to believe that skills and ideas that we actually acquired by doing, or that came naturally to us (as we already knew by our innate biological instinct) came from books, ideas, and reasoning. We get blinded by it; there may even be something in our brains that makes us suckers for the point.

In short, the ‘error of rationalism” is that all humans tend to try to use our rational understanding, and our reasoning, to explain, understand, or predict the world. In fact, the smarter and more educated we are, the more likely we are to believe that we can use our superior reasoning skills to explain the world around us.

This can be a severe error because so little of our rational knowledge is actually useful in human affairs, where irrational human emotion can play such a major part. In the words of Nobel prize winning writer Daniel Kahneman, “People’s intuitive expectations are governed by a consistent misperception of the world.” Meaning that the human mind, when presented with uncertainty, will consistently and systematically act in an emotional and irrational way.

The Sophistication of Simplicity

We are quite fond of quoting Leonardo DaVinci who once said that “Simplicity is the ultimate sophistication”. Warren Buffett’s bet proved this point when it comes to picking investments, and exposed the danger of overconfidence, much to the embarrassment of the hedge fund industry. Buffett’s win made the point that the more complex the investing formula, and the more rooted in some very complex “logic”, the more likely it is to blow up when markets become temporarily illogical. Not to mention, with greater complexity usually comes greater transaction cost and management fees, which set a very high bar for most of these “formulas” to beat the market as advertised.

Despite our natural tendency to overcomplicate our understanding of markets, the stock market is really quite simple. Over time, the world economy naturally grows, thanks to population growth, productivity increases, innovation and human ingenuity. That economic growth translates to growth in company earnings. Because stock prices reflect company earnings, over time stock prices go up because earnings go up.

Sometimes, stock prices temporarily grow much faster than earnings do, as investor emotions get carried away with euphoria and greed. Other times, those excesses are corrected, and stock prices take a temporary step back as investor emotions get carried away with terror. Over the long run, those illogical moments of euphoria and fear are only temporary, and they fade away with the passage of time. Historically, the end result has been that long term patient investors have been rewarded with a return of just about 10% per year, a return which will comfortably allow almost any investor to growth considerable wealth, even after the impact of inflation.

There is not much need to overthink the investing process. If we can just remain focused on the long term, and control our emotions during moments of panic and euphoria, we will reap the benefit of equity ownership.

The very best investors have a disciplined approach to making portfolio decisions, and always stick to their plan, no matter what the rest of the world is doing. They keep it simple, and remain focused on the long term growth of capital that can arise from investing in an innovative and productive economy with growing earnings. They don’t let their emotional reactions to news headlines throw them off track, and they understand that a well-designed written investment and financial plan will result in long term success.