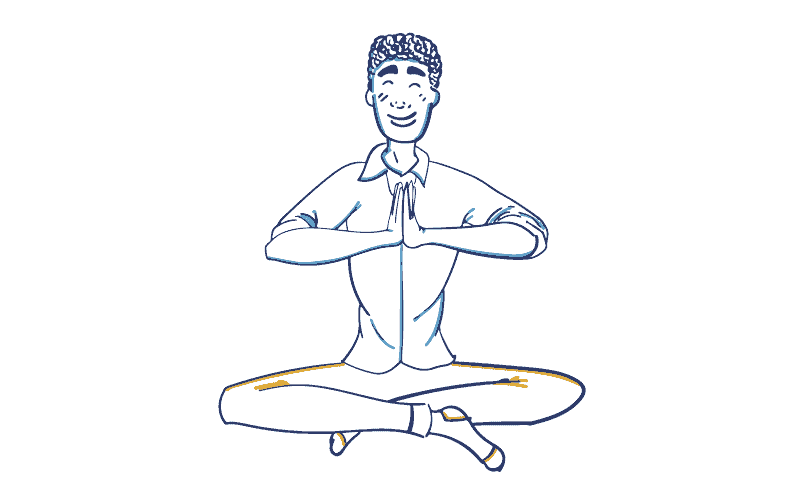 In last month’s article, we explored how hard it is to live through “Interesting Times.” This month we share a favorite parable about the value of maintaining equanimity in the face of changing conditions.

One of the most common ways we can accumulate wisdom is through personal experience, but there are other ways to gain wisdom. A more enjoyable way is through storytelling — especially stories that speak to the human condition and tell us about our place in the world.

One of our favorite stories here at Concentus comes from the Taoist tradition and is estimated to be more than 2,000 years old. It is the story of the “Zen Farmer.”

There once was an old Zen farmer. Every day, the farmer used his horse to help work his fields and keep his farm healthy. But one day, the horse ran away. All the villagers came by and said, “We’re so sorry to hear this. This is such bad luck.”

The villagers were confused but decided to ignore him. A few weeks went by, then one afternoon, while the farmer was working outside, he looked up and saw his horse running toward him. But the horse was not alone. The horse was returning to him with a whole herd of horses. So now the farmer had 10 horses to help work his fields.

All the villagers came by to congratulate the farmer and said, “Wow! This is such good luck!”

The villagers came by to commiserate and said, “How awful. This is such bad luck.”

Just as he did the first time, the farmer responded, “Good luck, bad luck … we’ll see.”

A month later, the farmer’s son was still recovering. He wasn’t able to walk or do any manual labor to help his father around the farm.

A regiment of the army came marching through town, conscripting every able-bodied young man to join them. When the regiment went to the farmer’s house and saw the young boy’s broken leg, they marched past and left him where he lay.

Of course, all the villagers came by and said, “Amazing! This is such good luck. You’re so fortunate.”

And you know the farmer’s response by now …

We often try to control the events of our lives by deciding which outcome would be good and which would be bad and then working to achieve the good one. When things go according to our plans, we’re overjoyed. But when things don’t turn out as we’d hoped, we’re deflated. We might even lash out at others who we think are responsible for creating the “bad” outcome.

However, we don’t always know whether an event will ultimately prove to be “good” or “bad,” and something that seems like good news in the present moment might bring inconveniences or even heartbreak in the future. On the flipside, something that appears to be a bad thing might become very useful on another occasion.

As investors, it can be useful to adopt an attitude similar to the Zen Farmer. It’s important to avoid being carried away by our momentary perceptions of how “good” or “bad” events may appear because we are fundamentally incapable of predicting what will happen next. Today’s bad news has a way of resolving itself into tomorrow’s good. When our emotions cause us to get carried away with predictions of how good or bad things will be in the future, it can blind us from the reality that conditions are always changing, and our emotional reaction will probably cause us to make a regrettable mistake.

To illustrate this, here is our modern-day take on the last two years of experiences for the “Zen Investor.”

An unforeseen global pandemic arises, taking world markets and economies completely by surprise. Panic ensues, and the S&P 500 tanks by 35% in a single month. What bad luck!

In fact, we know now that the COVID-19 pandemic has not been nearly the economic and market catastrophe that was predicted. Global monetary authorities responded to the pandemic by creating unprecedented levels of new stimulus and liquidity, and the pandemic’s impact on economic activity was not nearly as bad as predicted.

Thanks to these exceptionally loose monetary conditions created by global monetary authorities, the economy recovered quickly, and the S&P 500 skyrocketed by more than 100% in just about two years. What good luck!

As we might expect, all of this money printing and stock market appreciation has led us to an overstimulated market and economy. Inflation is soaring at a rate of over 8%, and the Federal Reserve is now compelled to “tighten” monetary conditions significantly. When we turn on the financial news today, we are told inflation is raging at historic levels and is now over 8%. The Federal Reserve will have to raise interest rates, which will strangle the economy to wring inflation out of it. Interest rates must soar, the economy must fall into recession, and the stock market must crash. It’s as plain as the nose on your face. What bad luck!

This is the part of the story where history ends and the future begins, so we don’t know what kind of luck may be headed our way next. There are no facts about the future, but here are some thoughts about why it’s possible that this new direction of monetary policy is not as “bad luck” as it seems, and it may be best to take a “we’ll see” attitude.

Popular culture and the financial media suggest that higher interest rates are always terrible for economic growth and stock market performance. Contrary to popular belief, tightening interest rates don’t always translate directly to a recession and stock market slump. Historically speaking, Fed tightening doesn’t automatically tank the equity market, and in the last half-dozen tightening cycles, it’s been the opposite. As shown on the chart below, during the previous six times that the Federal Reserve was tightening monetary policy, the S&P 500 annualized gains averaged 9.5%.

According to Wikipedia’s useful article on the history of recessions, which includes the National Bureau of Economic Research’s “official” data:

A reasonable observer might conclude from this data that if someone has a genuine, long-term perspective, recessions are somewhere between a blip and a distraction.

As we have demonstrated in this space many times before, we find once again that the economy cannot be consistently forecasted, nor the market consistently timed.

We cannot possibly predict the next chapter of the Zen Investor’s story we started above. However, we can recount the “good luck” that befell patient investors the last time the world went through a time that looked an awful lot like the inflationary fix we find ourselves in today, which was:

The Federal Reserve recognized the threat that inflation poses to our nation’s economic well-being and resolved to do something about it. It administered the admittedly tough medicine of higher interest rates and tighter monetary policy. After a short bout of economic and market volatility, the stage was set for the next major stock market advance. What good luck!

The U.S. is currently in a perniciously high inflation environment, in large part because the Federal Reserve expanded the money supply far too much and for far too long. It is now faced with the necessity of withdrawing the excess by shrinking the money supply and rising interest rates in order to get this roaring inflation back under control.

You want them to do this.

And if it takes a recession to break the back of this inflation—and if that recession causes the equity market to sell off further and longer than it already has—a sane long-term investor must not merely endure this but embrace it.

This is exactly how the Federal Reserve Chairman Paul Volcker ultimately snuffed out the hyperinflation back in the 1970s. It certainly wasn’t pretty when he did this —interest rates shot up over 20%, unemployment soared to near 11%, and the S&P 500 went down by 27%. But once inflation was dead, the stage was set for the greatest bull market of all time, which lasted from August 1982 until March 2000. Over that period of 18 years, the S&P 500 appreciated by just about 14 times its value. Even if we have to endure a little bit of market and economic volatility to get there, we sure wouldn’t want to miss out on anything remotely like that if it comes to pass.

The Zen Farmer story is about developing the quality of equanimity, the understanding that life is inherently impermanent, and conditions are always changing as time marches on. The “bad luck” that we perceive today is most likely sowing the seeds of the next round of “good luck” coming our way tomorrow. When we become too wrapped up with our perceptions of conditions right now, we place ourselves on an emotional rollercoaster and often waste a great deal of energy on predictions that really don’t mean anything.

In our wealth planning, we must learn to become “The Zen Investor” and practice this kind of equanimity.  Every day, the investment markets and financial media bombards us with messages about how the current conditions are “good luck” for investors or represent terribly “bad luck.” These messages constantly tempt us to become emotionally reactive to current conditions, and emotional reactions drive our investment decisions, and our most regrettable mistakes ensue.

Here is the good news: when it comes to the equity market, the patient and non-reactive investor is always rewarded with generational wealth in the long run. Through all of the temporary “good luck” and “bad luck” that the S&P 500 has experienced over the last 75 years, an investment of $100 in the S&P 500 in 1946 is now worth over $20,000.

For patient investors in equities, the fable always ends in good luck

It’s probably worth restating our overall principle of investment advice. It is goal-focused and planning-driven, as sharply distinguished from an approach that is market-focused and current-events-driven. Long-term investment success comes from continuously acting on a plan. Investment failure proceeds from continually reacting to current events in the economy and the markets.

We are long-term equity investors, working steadily toward the achievement of our most cherished lifetime goals. We make no attempt to forecast the equity market; since we accept that the equity market cannot be consistently timed by us or anyone. We believe that the only way to be sure of capturing the full premium return of equities is to ride out their frequent but ultimately temporary declines. Historically, the permanent advance has triumphed over the temporary declines.

Our essential principles of goal-focused portfolio management remain unchanged. The only benchmark we should care about is the one that indicates whether we are on track to accomplish our financial goals, and risk should be measured as the probability that we won’t achieve our goals. Investing should have the exclusive goal of minimizing that risk.

The very best investors have a disciplined approach to making portfolio decisions and always stick to their plan, no matter what the rest of the world is doing. They are able to live through the peaks of euphoria, as well as the depths of terror, with a healthy understanding that a well-designed written investment and financial plan will get them through both.

When we get carried away with emotions, it can blind us from the reality that conditions are always changing. Our emotional reaction will probably cause us to make a regrettable mistake.
CONTACT US TODAY
By Erik Strid|2022-05-24T13:25:41-04:00May 24th, 2022|Blog, Great Investors Series|