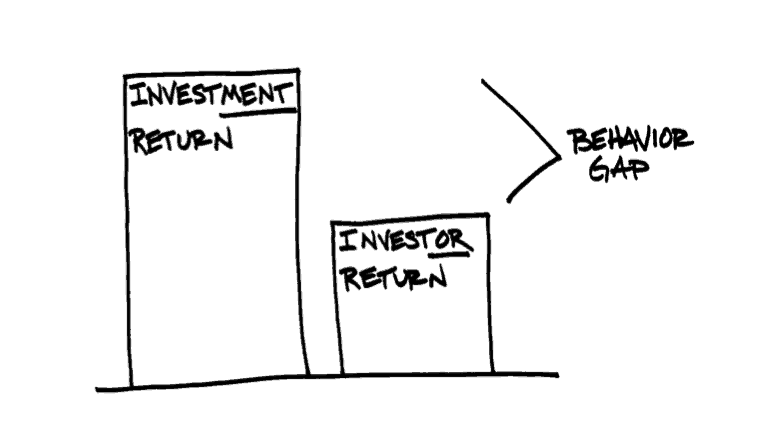 “The Investor’s Chief Problem – and even his worst enemy – is likely to be himself.”
– Benjamin Graham

Over the last 20 years, the average equity mutual fund investor underperformed the S&P 500 by a average margin of -3.5% annually. Over a 20 year period the S&P returned 8.2% per year, but the average investor in stock funds only got 4.7% per year.

Why does this happen? Why is the average American such a terrible investor?

Most investment advisors who have been in the profession for any meaningful period of time are familiar with a company called DALBAR, which is a market research firm which provides research and data to the financial community. In particular, they are best known for their research about investor performance and behavior, and their annual study called the Quantitative Analysis of Investor Behavior.

This report, which has become quite well known in the financial services industry, is basically the definitive guide to all of the available data one would care to know about investment product performance, and most importantly the returns achieved by actual investors across the country. Invariably, every year the study demonstrates how poorly the vast majority of investors perform relative to the overall stock market, and the reasons for that underperformance.

For example, the recent study in 2015 found the following:

Year in and year out, the DALBAR study suggests a reality that there is a significant difference between investment return, and investor return, and that most investors significantly underperform the investments they own.

The CEO of DALBAR wrote a cover letter to accompany their 2014 study when it was published. In the letter, he wrote:

Despite all of the left brain data, information and advice that have become limitlessly available to investors in this Internet Age, their behavior has not changed. It seems that investor education doesn’t work.

Why does this happen? Why is the average American such a terrible investor?

Overwhelmingly, it is due to what DALBAR calls “Psychological Factors”. In their view, all human beings fall prey to certain behavioral biases which lead to poor investment decision-making, and that these behavioral biases are the single largest contributor to underperformance over time. DALBAR identifies 9 of these factors:

The biggest of these biases are the “Herding Effect”, and “Loss Aversion”.

These two behaviors tend to function together compounding investor mistakes over time. During bullish periods, investors begin to believe that the current price trend will continue to last for an indefinite period, and tend to “Herd in” to a particular market or sector, believing that they must “get in now” before somebody else makes more money than they do. The longer the rising trend lasts, the more firm the belief becomes until the last of “holdouts” finally “buys in” as the financial markets evolve into a “euphoric state.”

As market corrections evolve to full Bear Markets, there is a slow realization that the current decline is something more than a “buy the dip” opportunity. As losses mount, the anxiety of loss begins to mount until individuals seek to “avert further loss” by selling.

In the end, we are all just human, and our brains are hard wired to make us poor investors. We all have a tendency to experience euphoria and a desire to scramble in to stocks when they are at peaks, and terror and rush out of stocks when they are at their lows. Despite our best intentions, and opinion of our own abilities, it is nearly impossible for an individual to avoid the emotional biases that lead to poor investment decision-making over time. This is why all great investors have strict investment disciplines that they follow to reduce the impact of human emotions.

Unfortunately, another basic human flaw is our tendency to over-inflate our opinion of ourselves, particularly when it comes to evaluating our investment skill.

We all have a natural tendency to believe that these basic human emotional realities apply to most other people, but that we are somehow the exception to the rule. When presented with the DALBAR data, most investors may accept the reality that the average investor achieves poor results due to these behavioral biases, but that somehow they are immune from these emotions, and capable of behaving in a completely rational and non-emotional way. We all think we are the exception to the rule. And then a tech bubble comes along… or perhaps a financial crisis, and we find out that we are just human after all!

In the end, it is important to remember that all great investors have strict investment disciplines that they follow to reduce the impact of human emotions.